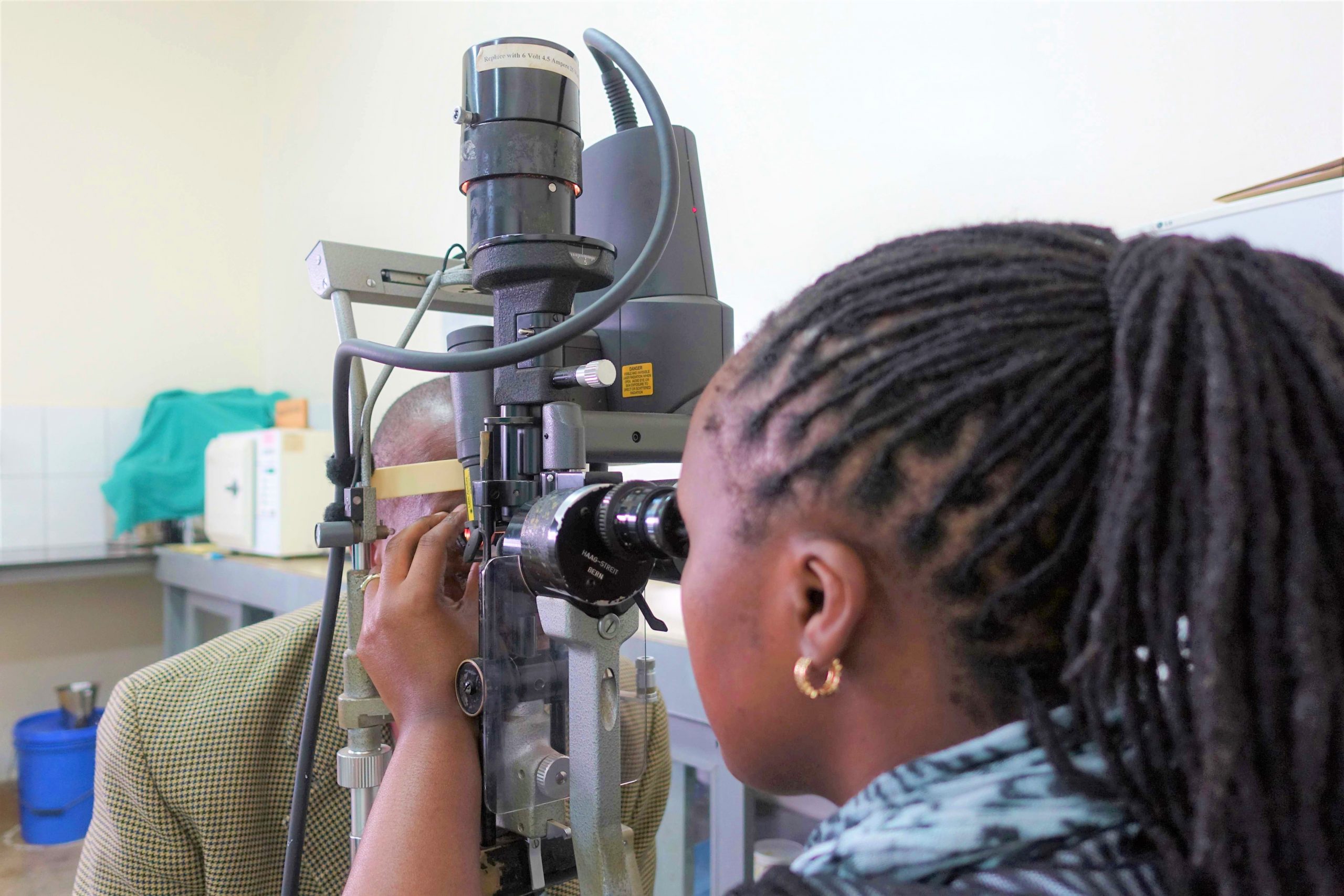 A doctor performs an SLT treatment on a patient with glaucoma in Tanzania Photograph: Heiko Philippin

Laser treatment has the potential to transform the management of glaucoma in Africa, and to prevent more people from going irreversibly blind, particularly in regions with high disease prevalence and incidence, suggests new research published in Lancet Global Health.

Conducted in Tanzania by ICEH, the research is the first randomised controlled trial exploring the use of the laser treatment, Selective Laser Trabeculoplasty (SLT), for patients with glaucoma in Sub-Saharan Africa.

The researchers found that SLT successfully reduced eye pressure to normal levels (up to 18 or 21mmHg) in significantly more patients after one year (61% of eyes) compared to the standard treatment of timolol eye drops (31% of eyes).

The study also considered the affordability of SLT, finding that in spite of the initial cost of the laser equipment, for hospitals dealing with high volumes of glaucoma patients the treatment could be offered at a similar price as the annual supply of eye drops.

The study was conducted by the International Centre for Eye Health (ICEH) at the London School of Hygiene & Tropical Medicine (LSHTM), in partnership with the Kilimanjaro Christian Medical Centre (KCMC) in Tanzania. It was funded by the international disability charity CBM (Christian Blind Mission) and the Seeing is Believing Innovation Fund.

Dr Heiko Philippin, Clinical Research Fellow at the ICEH at LSHTM and study lead, said: “Glaucoma requires life-long treatment and follow-up to save a person’s sight, which can be very challenging in many settings. Currently, most people are treated with eye drops but many struggle with taking them regularly or accessing new bottles, for example due to cost or distance to the nearest clinic.

“These study results are exciting because they show that we can treat glaucoma more successfully with a one-off or occasionally repeated outpatient laser treatment to reduce eye pressure at least for one year, compared to the most commonly used eye drops in lower income regions. We are grateful to all participants and our colleagues for their commitment and hope that these findings will improve glaucoma care for many people at risk of becoming blind.”

Timolol eye drops are subject to erratic application, systemic and local side-effects, and high long-term costs due to the need for daily life-long treatment in settings where health insurance options are rare. The Lancet Global Health Commission on Global Eye Health called for research into cost-effective glaucoma interventions, especially those that are applicable in low- and middle-income countries.

Dr William Makupa, Head of Ophthalmology at Kilimanjaro Christian Medical Centre, said: “In our setting glaucoma is diagnosed late, and some of the patients after sometime decide to ignore or just stop using eye drops. If we can establish an alternative effective means of arresting the disease, we would bring about a positive impact on the quality of life of these patients.”

SLT is already widely used in high-income countries. During the treatment, approximately 100 laser spots are applied to the tissue at the base of the cornea which is responsible for draining the fluid from the eye.

While previous trials have compared SLT and eye drops, this is the first to do so with predominantly advanced glaucoma patients and the first to compare SLT with timolol. The study also reflects the typical spectrum and associated challenges of glaucoma care in this region.

Based on 500 eyes treated each year, and taking into account the cost of the equipment and maintenance, one SLT procedure would cost $12.49 in total, while annual therapy with timolol eye drops cost around $16.32 per eye in Tanzania. In this study 33 eyes required two SLT treatments, and 66 eyes were successfully treated after one procedure. Therefore, in spite of the initial costs of the laser equipment, they estimate around 500 SLT treatments would cost a similar price as timolol eye drops for hospitals dealing with high volumes of glaucoma patients.

Professor Matthew Burton, Director of ICEH, said: “This result is very important for improving glaucoma treatment in low- and middle-income countries. Poor eye health has a knock-on effect on poverty, employment and development. With the number of people affected by glaucoma set to rise, studies such as these are crucial for identifying solutions that can tackle the challenge and improve the lives and livelihoods of those in Sub-Saharan Africa and beyond. Showing a significant improvement over the standard treatment for glaucoma is a real breakthrough for treating the disease in areas that historically struggle with treatment and adherence.”